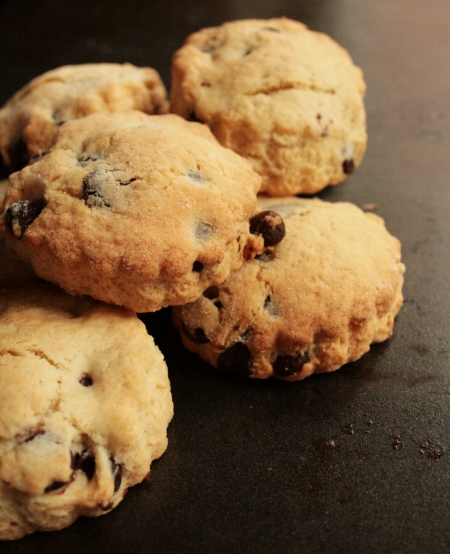 Giving up biscuits for Lent has meant I’m baking things to replace the banned biscuits, not exactly the healthy intentions I had in mind. Given I’m half Welsh, and proud before you ask, I often celebrate St. David’s day in a foodie vein; surely the best way to celebrate any special day in the calender. Be it Welsh Cheesecakes, Bara Brith , anything with leeks or Welsh Cakes I’ll try to bake at least one around the 1st March. Traditionally Welsh Cakes are made with raisins or sultanas but as I discovered at Fabulous Welshcakes in Cardiff Bay you can put different fillings in welsh cakes. I had a look around the baking cupboard, of which I swear I could open my own baking suppliers with, and found chocolate chips begging to be used.

Technically you could argue that these are not Welsh Cakes as they are baked in the oven and not on a griddle; I wanted to play around with recipes suitable for schools. I suppose they could be described as a richer version of scones, but with a lighter texture. By all means this recipe could be cooked the traditional way on a griddle giving the cakes the distinctive browned flat top and bottom. Both methods of cooking taste more or less the same they just look different. Perfect with a cuppa and in my eyes a perfect substitute for the banished biscuits.

1) Rub butter into flour until it has the consistency of breadcrumbs. Stir in sugar and chocolate chips. Break in egg and mix until you have a dough.

2) Roll out onto a floured surface until around 1cm thick and cut into 5cm rounds. Place on a lined baking tray. Bake at 180°c for 10-15 until cakes are golden.

This site uses Akismet to reduce spam. Learn how your comment data is processed.