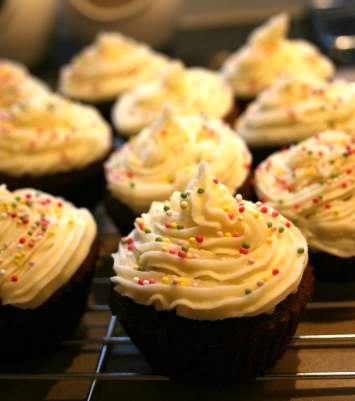 As soon as I saw these beautiful cupcakes on Hannah’s blog I knew I had to make them. I’ve never made, what I call, American Cupcakes with the swirls of buttercream on top before. I baked them in my silicone cupcake cases and they make things so much easier, I would highly recommend them for anyone who does baking. I used the last of my homemade butter to make both the cakes and the buttercream.

The cupcakes are a Valentines gift for Hubby. However to ensure they are edible I had to just taste test one of them, and I can say they are delicious! I wasn’t able to get hold of any Valentines related sprinkles so had to make do with hundreds and thousands.

Two things I learnt while making these cakes:

1) Don’t, on a whim, decide to use the old electric whisk that has been getting dusty in the cupboard since you received your all singing & dancing stick blender. The old whisk will only speed up and slow down on it’s own accord and smell like burning plastic. The said whisk is now living at the bottom of the dustbin.

2) Hundreds & Thousands are called that for a reason. When sprinkling them on make sure you have something underneath with a lip to catch them or, like confetti, you’ll be finding them for months to come. You wouldn’t believe how far they roll.

This site uses Akismet to reduce spam. Learn how your comment data is processed.

When your child begins to read independently it’

By 5.30pm Sunday, guests had left and I was alread

I started out 2019 knowing deep down there were bi

🌟 Merry Christmas one and all. We have one very

Load More…
This error message is only visible to WordPress admins